Pastor Willie David Saul preached at Ekoftau Assembly of God church on Sunday. Though he could have chosen a quiet retirement, Pastor Willie resigned his city pastorate a couple of years ago and has been traveling as an itinerant evangelist. He goes to the remote places of Vanuatu to encourage pastors, to preach revival services in churches of any denomination and to evangelize unreached peoples. This has been physically demanding for a man of his age, as he has hiked through dense bush, slept along the trails and experienced God’s provision in some very difficult circumstances. He was initially financed by a group of Christians from the island of Paama but now others are wanting to share in this vision. Pastor Willie just finished a tour of each of the southern islands of Vanuatu in the Tafea province and is planning to head to Malampa province next. We thank the Lord for pastors like Willie David Saul and his wife who continue to serve the nation of Vanuatu. 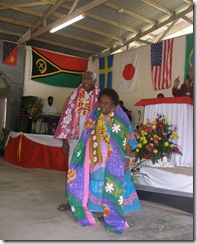