We have served overseas since 1982 with Assemblies of God World Missions, teaching in Bible schools in the French-speaking countries of Ivory Coast, Togo and Belgium. From 1998 to 2007, we did general missionary work in French Polynesia.

We have been in Vanuatu teaching at the Joy Bible Institute since August 2007.

Gary serves as principal of Joy Bible Institute, the pastors’ training school for the Assemblies of God of Vanuatu. Gary enjoys teaching Bible, theology, and pastoral theology courses as well as preaching in the local churches on the weekends. While in Vanuatu, he has a Sunday morning 45 minute broadcast on the nation’s largest secular radio station. Gary has an M.Div, M.A. and has done extensive doctoral studies in New Testament and Missions, both in the United States and in Europe. He has a website in French with pastoral helps and articles: www.coeurdeberger.com.

Lori likes to teach Biblical Archaeology and backgrounds classes. She has an M.A. and has dug in Ashkelon, Israel. She publishes a variety of Christian materials, tracts, and Sunday School literature in Bislama, one of the official languages of Vanuatu.

A bit of history

Lori’s connection with Vanuatu dates back to the late 1960’s. Lori actually grew up in the South Pacific. Her parents, Ronald and Joy Killingbeck, were the first Assemblies of God missionaries to work with the Ni-Vanuatu people. Her family arrived in Noumea, New Caledonia in 1967 to start a church among the French-speaking New Caledonian people, but they quickly realized that the nickel ore boom had brought thousands of workers from many other island countries to New Caledonia. Among them were men from Vanuatu (then known as the New Hebrides Islands).  From the moment that the Killingbecks became aware of the Ni-Vanuatu community, they had a desire to reach them for Christ. At that time, there was no Assembly of God work in the country of Vanuatu.

In New Caledonia, Ron Killingbeck had rented an empty store, in the neighborhood of Faubourg Blanchot, which he would eventually buy to use as a church. The family lived in the back storeroom during their first months in Noumea. Partnering with the Killingbeck’s in this church-planting effort were Pastor Jean and Simone Ledru, a young couple from France. The Faubourg Blanchot storefront church soon became a busy gathering place on Sunday mornings. Pastor Ledru would lead the early morning French-speaking service and as soon as it dismissed, Pastor Killingbeck would lead an English-speaking service for the Ni-Vanuatu. The people of Vanuatu spoke many languages but were united by one language called Bislama, a type of pidgin English. The Killingbecks quickly began using the Bislama language in their services and building relationships within the Ni-Vanuatu community. The church grew.

Joy Killingbeck befriended a young Vanuatu student, Loulou Manwo, who spent his weekends partying and having mishaps on his motorcycle. She often visited him in the hospital or saw him in town and would always invite him to church. He often said he would come but it seemed that he never would. Then, one Sunday, Loulou came to church and his heart was touched by the message. At the end of the service he came forward for prayer and his whole life changed. In 1969, Loulou became the first Ni-Vanuatu to go to the South Pacific Bible College in Fiji for ministerial training. In the following years, many more young Ni-Vanuatu men and women would go to Fiji for ministerial training and then return to Vanuatu to minister in their home islands and villages. Rev. Loulou Manwo would graduate from the Bible school in Fiji and pastor the Ni-Vanuatu church in New Caledonia until his death. He would also serve some years as Superintendent of the Assemblies of God work in Vanuatu. 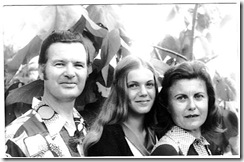 In 1972, the Killingbeck family moved to the northern Vanuatu island of Espiritu Santo to pioneer a church in Luganville. During this time, Ron and Joy began talking with the national church leadership about the need for a Bible training program in Vanuatu. During their furlough in 1977-78, they raised funds in the United States to build a Bible school in Vanuatu. In January 1979, Ron and Joy returned to Vanuatu to start building the present JBI campus in Port Vila. Lori stayed in the United States for college. But Joy Killingbeck had been fighting cancer for almost 5 years and was not well. She had returned to Vanuatu concealing the fact that she had terminal cancer. In March 1979, Joy died. Ron Killingbeck, local pastor Robert Laumai, missionary Wayne Guge and others continued building the new Bible school. The Executive Committee of the Assemblies of God of Vanuatu decided to name the new school, Joy Bible Institute, in honor of Joy Killingbeck.

You may contact us directly using the form below. Thank you!

One Reply to “About Us”