Sunday, May 13, 2012, was the opening ceremony for the weeklong National AOG Youth Conference. Youth from many islands marched through Port Vila to Saralana Park following the Vanuatu Mobile Force band to officially open the conference. After several speeches and special music, Rev. Dick Hopkins preached. 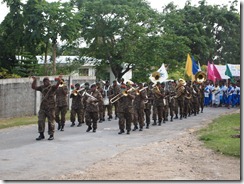 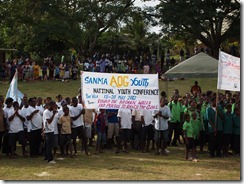 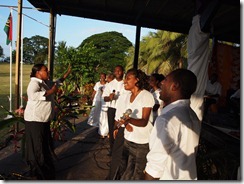 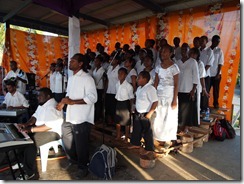 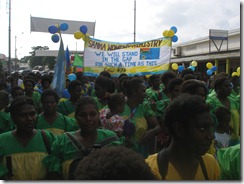 National WM Conference started this Sunday afternoon with a bang…actually it was a marching military band and a parade through downtown Port Vila that started things off! Delegates from every province of Vanuatu (including myself) in matching island dresses and a large group of ladies from the Solomon Islands marched behind the Vanuatu Mobile Force band up to Saralana Park where the conference will be held this week.

The Conference opened with Royal Rangers raising the Vanuatu flag and a group of Missionnettes doing an action song (Jasmine among them) and then welcome speeches. Mrs. Natapei, the former Prime Minister’s wife graciously came and officially opened the conference on behalf of the government. The mass AG youth choir did a great job under the direction of Matilda. Mrs. Beverly Komasi, wife of AG Supt of the Solomon Islands, was the opening speaker. The conference theme is, “Who Will Stand In the Gap For Such A Time As This?” So things got off to a great start! 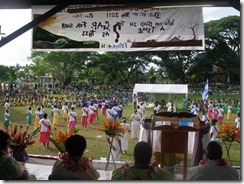 Scheduled speakers are Mrs. Beverly Komasi from the Solomon Islands, Mrs. Naomi Vueta from Fiji, Mrs. Agnes Fave from Papua New Guinea and myself. So keep us in prayer!