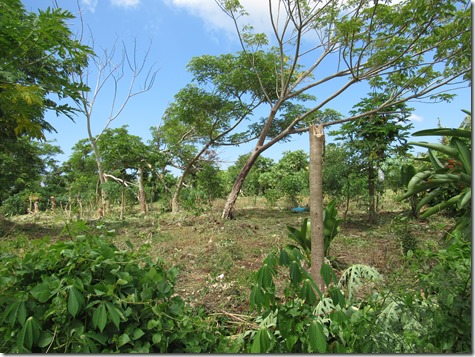 On the 18th of January, we started clearing the JBI off-campus property where we plan to build some small houses to accommodate married JBI students and their families.

Most of our married students come to JBI from outer islands. Until we built the three small apartments on campus in 2013, husbands left their families behind to come to Bible School for 9 months at a time. You can imagine the sacrifice and difficulty in doing so. But rented rooms in Port Vila are way beyond the budget of our students.

Providing simple housing for married JBI students has been on our priority list ever since we came to JBI in 2007.

We have some money for this project and planned to start building last year. That was before Cyclone Pam hit us and left widespread destruction! Major repairs to the JBI main campus buildings started last March, required our immediate attention, and are now ongoing as funds permit. But “Our Village” needed to be started!

Notice the trees in the photo above, they survived the cyclone but are forever bent from the high winds. Most of the trees on this property were lost.

This week has been spent clearing the 2500m2 property which is actually in a newer subdivision called Beverly Hills, just a 10 minute walk from the JBI main campus. We had never seen the land totally cleared, so we were excited to find the boundary stones and see visually just how big it is! In the photo below I am standing (white speck in red circle) at the end of the fence, all the land to the right of the fence is JBI’s! 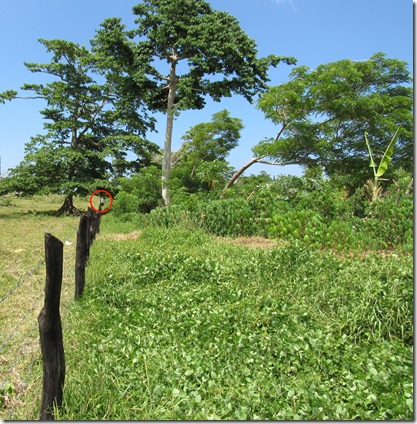 Our long term goal for this property is to have at least eight small student houses, a communal kitchen, and a daycare to serve the JBI families and as an outreach to the community.

THANK YOU again to those who helped us buy the property in 2014 and finance the building of the first two houses!