Thank you so much to everyone who has contributed towards repairing the JBI campus after Cyclone Pam. We were able to buy new metal roofing and timber, and order cyclone screws and brackets from Australia because of your donations.

As funds and building materials became available, we were able to gather a local work crew to start repairs on the urgently needed girl’s dorm. The girl students have stayed in several different places on campus in the last couple of months as their dorm was inhabitable. They are anxious to get back in their own rooms.

MAPS volunteer, Colton Cravatt, joined us on May 8, to help build. He is on his summer break from Ozark Bible Institute.

There was a lot of debris to clean out of the damaged upper floor of the girl’s dorm. Part of the kitchen and living room roof was totally blown away by the cyclone. The rusty metal roof sitting in the kitchen area did not even belong to that building or any other building on campus from what I can tell! (see photo above).

The blue kitchen cupboards are not salvageable, water damage has completely ruined the MDF. The solid wood countertops will be sanded down and re-varnished to use on the new cupboards which will be made locally. 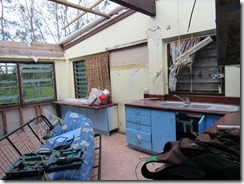 New timber roof structure was added as the roof was replaced. Cyclone strapping, brackets, and special screws were used to insure this roof will withstand the next cyclone. As sections of the new roof were finished, the electrician ran new electrical cables. New ceilings were needed everywhere as the old drop ceiling panels were whipped to pieces. The new plywood ceiling is being completed this week and energy-saving LED lights will be installed. The electrical wiring and light fixtures had really needed updating so this is a real bonus. 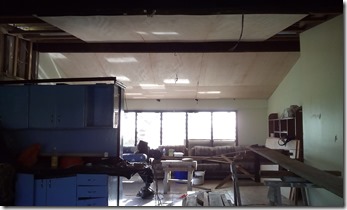